The Fox Sisters lived in Hydesville, New York, a small hamlet of glacial hills north of the Finger Lakes and south of Lake Ontario. Hydesville is now part of the Town of Arcadia. This nondescript town gave birth to the spiritualist renaissance in the United States and ultimately created the modern spiritualism movement.

Modern spiritualism can be traced back to a single day, March 31, 1848 when an entity first made contact with the young sisters Fox, Maggie (14) and Kate (11). Unknown sounds plagued the Fox household. The house emanated unknown booming sounds, there were cracks and bangs, even the floorboards would reverberate. Doors would thud, bed frames would shudder.  Because of these event, it was a frightening time in the Fox household for there was no known source for this invisible force. As a result. their parents took notice that the sounds and vibrations seemed to follow the Kate and Maggie wherever they moved in the cottage as if being pursued by this dominating, invisible entity. 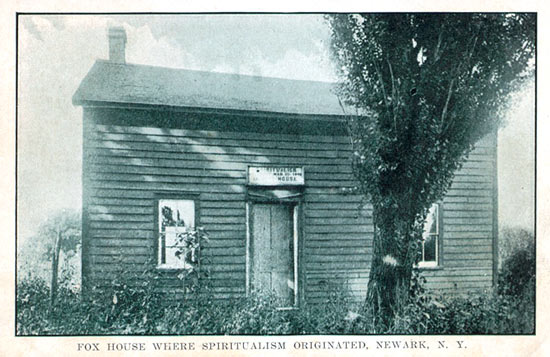 Their father, John, scoffed it off as loose floorboards but their mother, Margaret, believed the house to be genuinely haunted.

Their mother crept into the girls’ bedroom after hearing these sounds and addressed the entity as Mr. Split-Foot in reference to the devil; hauntings were not of a Christian nature therefore they must be the result of evil. She demanded that Mr. Split-foot do as she did, and she snapped her fingers in cadence. Mr. Split-foot repeated the cadence by rapping in the same cadence. She then clapped her hands four times and Mr. Split-foot followed with four raps.

Mrs. Fox continued her line of questioning. She demanded that the ghost count to ten and ten raps followed. She then asked about how many children she had given birth to and how many were still alive, the proper numbers of raps came back, seven and six respectively. Mrs. Fox asked how old each of her children were and their ages were rapped out appropriately. Later that night, she asked if the spirit was injured and if so, make two raps and two raps resounded.

Through a continuing series of raps, a portrait of what was causing the disturbance began to emerge. A previous tenant murdered and relieved a thirty-one-year old male door-to-door peddler of five hundred dollars. The resident buried the peddler under the Fox household. Later on, residents would vaguely recall a peddler that came through. The sisters’ eldest brother, David, eventually dug under the home and purportedly found bones, strands of hand and human teeth. These bones, and the Fox cottage, were moved to Lily Dale, New York, the home of the oldest spiritualist encampment in the United States.

Mrs. Fox asked if Mr. Split-foot would make himself known to the neighbors should she bring them by. Mr. Split-foot agreed. Over the next few nights, the house was overrun by neighbors who wanted to witness this phenomenon. Mr. Split-foot would only communicate when the sisters were present, and the neighbors were able to hear first-hand the story of the murdered peddler. The problem was that raps were a very clumsy means of communication. David, who lived in a nearby home, hit upon a novel means of communication with the spirit – he ran through the alphabet and the spirit would rap on a letter to ultimately spell words and sentences. By this means, the spirit was able to communicate with those in the room. To the awestruck group of neighbors in the tiny bedroom of the Fox sisters, this was nothing short of a miracle.

Their Reputation Grew Beyond Hydesville

In short order, word spread quickly through both newspaper and conversation. The sisters’ eldest sister, Leah, was a teacher in nearby Rochester, New York, and she heard about the events through a student. Consequently, Leah rushed home and saw that there was a group of people milling about the family cottage hoping to hear the raps of the spirit. The family wasn’t there though, they had moved into David’s place to keep away from the crowd. When Leah witnessed what was going on, she happened upon a plan and whisked the sisters away to a home in Rochester, New York. There, she charged visitors a dollar to communicate with the spirit realm.

From that point onward, the Fox Sisters reputation grew. Eventually, they went on tours demonstrating their abilities and became celebrities. By 1850, rapping had become the new spiritual craze and there were no less than forty families in the state of New York that claimed to be experiencing the same rapping phenomenon. The Fox Sisters quickly grew to become the foremost spiritualist mediums in the United States. In 1851, a writer at Spiritual World tallied over one-hundred spiritualist mediums in New York City alone. The Fox Sisters also brought their means of spiritual communication to England during a tour and demonstrated communication by rapping.

Things soon fell apart. There were hardships for the sisters as they fought, separated and each wound up poor. They relied upon the kinship of friends to keep a roof over their heads in their sunset years.

By the time of their death (they all died between 1890-1893), there were millions of spiritualists around the globe. It was a movement that they had started in that little cottage in Hydesville.

Modern paranormal investigators owe a lot to the machinations of the Fox Sisters. If you watch any ghost-related television, or attend ghost hunting investigations, you’ve undoubtedly heard someone ask a spirit to “make themselves known” by knocking “once for yes, twice for no.” This same technique is the same as the modern and oft maligned “flashlight technique.” The light flashes once for yes and twice for no. All of these methodologies have their roots in the work of the Fox Sisters.

If the Fox Sisters were ever genuinely in contact with spirit is a big question in spiritualist circles. In 1888, Maggie was destitute and offered a tell-all for $1,500 which was a sizeable sum. At a public event at the New York Academy of Music, Maggie sat on stage with her sisters in the audience nodding along, and outlined how they had accomplished their feats.

The sisters, forty years prior, had schemed to trick their parents for fun. In addition, she admitted to creating thuds by rolling apples down the stairs to sound like footsteps. They banged on the walls at night. More importantly, they had learned to contort muscles and joints to crack and pop. It all came to head that night when their mother entered their bedroom and asked questions of Mr. Split-foot. Kate tried to explain away the sounds by saying that the next morning was April Fools’ Day and someone was just trying to prank them. The neighbors arrived in and the sisters continued their charade. By then they had committed to the lie and felt they had to continue it rather than dishonor their family in such a small community.

Several doctors and scientists examined the sisters over the course of their careers; many found them to be fraudulent which ultimately hurt their credibility and led to their poverty. During a show in Buffalo, New York, examination found that if the sisters were seated with cushions under their feet, then there would be no communication from the spirit realm. This helped to prove Maggie’s tell-all that most of their communications were achieved by popping their toe joints against wooden floorboards. This popping caused the resulting noise to resound with echo throughout the room.

Despite the chicanery of the Fox Sisters, their machinations changed the notion of spirit communication around the world. People began trying to communicate with spirits in earnest and developed many methods that have expanded the breadth of spiritualist research. EVP, ghost boxes, planchettes, dowsing rods and other means of communication closely related field of ghost hunting are all firmly rooted in the actions of the Fox Sisters. The Fox Sisters created the spiritualist movement, but the movement certainly did not stop with them.