1941 was a turning point in the history of the United States. Across the Atlantic, war raged as the Nazi regime seized the European countries, holding them in its iron grip. Until that year, the United States maintained it’s isolationism as it recovered from major economic difficulties. While the world burned, America intended on sitting this one out.

All that changed on December 7, 1941 when the Imperial forces of Japan got the drop on the United States by staging a sneak attack on Pearl Harbor in Hawaii. The attacked killed countless people and dragged the might of the United States military into international conflict.

Hot on the heels of the attack paranoia ran high along the west coast as Japanese submarines were allegedly seen in the Pacific. For the most part, the reports were considered to be nothing more than just rumors. The military didn’t believe for a second that Japan would be so brazen to attack the US mainland. Regrettably, they were mistaken.

America’s worst dreams were realized on February 23, 1942 when a Japanese sub bombarded the Ellwood oil fields outside Santa Barbara. Proving just how capable the Japanese were. The cities and towns along both coasts suddenly found themselves in a heightened state of preparedness. Millions of innocent civilian lives hung in the balance. If the enemy could attack an oil field, they could definitely hit a major city.

The very next night, February 24, a strange object was sighted hovering soundlessly over the entertainment capital of the world, Los Angeles. As soon as it was seen, the shrill cacophony of air raid sirens tore apart the peace and quiet of the early morning hours. As the sirens blared, a complete blackout was ordered for Los Angeles and surrounding areas. Blinding spotlights were pointed at the mysterious object that silently hung in the sky. With the target acquired, the 37th Coast Artillery Brigade opened fire unleashing fiery hell. If this was another Japanese attack they would live to regret it.

Hours later, the all clear was issued at 7:21 AM. Over 1400 rounds had been fired, several buildings were damaged and five people were dead. Although countless direct hits were made, there was nothing to show for it. The military knew they hit something, but there was no wreckage. Not even so much as a bullet riddled piece of metal could be found. Leaving them to question, what on earth did we fire upon?

According to several eyewitnesses, the craft the military fired on was immense, bigger than a building. Surely something that big could not have gotten away without some damage. People knew the military hit something. But what that something was, caused a great deal of debate.

The days following the incident, were days of weak explanations by the military’s top brass. General George C. Marshall, suggested the craft was a commercial airline piloted by Japanese agents to test our defenses. While Frank Knox of the Navy offered that war nerves were to blame. Although there was no evidence to back up either theory, the US government was prepared to accept these as viable explanations. And then, the picture of the incident was published. The game was about to be changed.

The Los Angeles Times, the city’s major news source, published a picture on the front page documenting that something was indeed fired upon. They weren’t sure what it was, but by all appearances it appeared to be a nuts and bolts craft. But it was unlike any aircraft they were familiar with. Whatever this craft was, was anyone’s best guess.

Looking back on that explosive night in 1942, UFOlogists believe the army fired upon an extraterrestrial spacecraft. The absence of wreckage or debris leads them to believe a technology was involved that can only be found in science fiction. This theory seems plausible given the fact these were highly skilled, highly trained soldiers not given to flights of fancy or war nerves. These same soldiers, in a matter of three years, crushed an evil power and saved the world from a genocidal madman. These were not men who made silly mistakes.

Whether it was war nerves or enemy aircraft, no one really knows the nature of the craft fired upon all those decades ago. If it was an alien spacecraft dropping by for a visit, we should consider ourselves damn lucky. Our international fight could have become an intergalactic one. A fight we might not have survived.

About Rick Hale 6 Articles
Rick Hale became interested in anomalous phenomenon at an early age after encountering an apparition in his grandparent's home. Rick is the author of "The Geek's Guide To The Strange and Unusual: Poltergeists, Ghost and Demons," and "Behold! Shocking True Tales Off Terror...And Some Other Spooky Stuff." Rick has been published in Haunted Times Magazine, Paranormal Underground Magazine, The Supernatural Magazine, Spookyisles.com and Legends Magazine. Rick appeared in Ghost Tapes 2 and Ghost Tapes: The Series found at YouTube.com.
Contact: Facebook 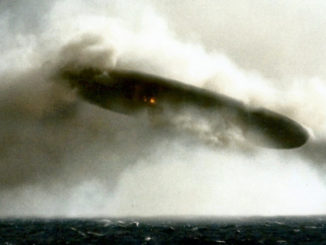